Take Five: “Most services for refugees in Turkey are gender-blind” 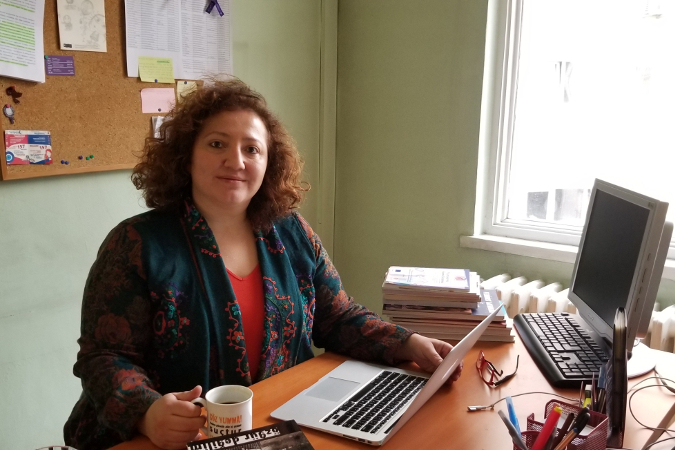 The Foundation for Women’s Solidarity (FWS) is an independent women’s organization dedicated to fighting violence against women, especially domestic violence and trafficking of women. The FWS opened Turkey’s first independent Women’s Counselling Centre in 1991 and its first independent shelter for women survivors of violence VAW shelter in 1993.

Last month, the organization was selected by UN Women to conduct a project to foster dialogue between women’s organizations and local actors, to help prevent gender-based discrimination and violence against women among the refugee population in Turkey. The project is being implemented under the regional programme, ‘Implementing Norms, Changing Minds’. Yelda Şahin Akıllı, a feminist activist and student at the Department of Gender and Women Studies at Ankara University, is FWS’s Project Coordinator in charge of the project.

Your organization has over two decades of experience providing services for women survivors of violence. What are the lessons learned during this time?

Women’s solidarity and the women’s movement have been key factors in changing the lives of women survivors of violence. Our organization was established in the midst of a wave of feminism in Turkey in the late 1980s. At the time, there were no counselling centres or shelters for women in the country. Today, as a result of more than two decades of struggle, we have persuaded decision makers to take greater responsibility for combating violence against women. We have successfully campaigned for changes in laws and ensured that different administrations take special measures for the protection of women survivors of violence and for the prevention of such incidents. This has been possible thanks to the collaboration of numerous independent women’s organizations, and their dedicated work towards common goals. The organized power of the women’s movement is fundamental to ending violence against women.

How would you describe the current situation for women refugees in Turkey?

There is a large refugee population currently living in Turkey. There are also over three million Syrian people who have been forced to flee their homes living in Turkey under a special protection status. Meeting the basic needs of these people requires a huge amount of financial and organizational capacity, as well as expertise and knowledge. Unfortunately, most of the services for the refugee and Syrian population living in Turkey are gender-blind. In particular, there is a lack specialized services for women survivors of sexual and gender-based violence (SGBV).

In your opinion, what are the priorities for ending violence against refugee women?

According to the law in Turkey, refugee and Syrian women have the same rights as Turkish women. This means that they can access the same prevention, protection and punishment mechanisms as Turkish women do. However, in practice they do not really benefit from these laws and mechanisms, and have very limited access to justice. In Turkey, support and protection services provided to women survivors of violence are inadequate – both in terms of the number and quality of services. The situation is even harder for women from marginalized groups, such as women with disabilities, refugee women, rural women or trans women. First of all, we need to raise awareness and build the capacity of service providers so that they understand and respect these rights, and to ensure services are available and accessible to all. At the same time, refugee and Syrian women should receive information and training on their rights.

What do you think are the main challenges of working with women refugees?

For refugee women, the main challenge is the language barrier. Support services provided to women survivors of SGBV should be in their own language, which requires procuring interpretation services. However, many women’s NGOs lack the necessary financial resources to hire interpreters. The relevant public institutions also do not employ translators and this is generally used as an excuse for not providing services to refugee and Syrian women. Moreover, the cultural differences, and the particular experiences and conditions of refugee and Syrian women requires a specific type of knowledge, which many service providers in Turkey currently lack. In addition, as a result of the language barrier and the restricted mobility that refugee and Syrian women experience, their knowledge of institutions where they can access services and counselling in cases of SGBV is limited. Therefore, outreach work in areas and neighborhoods where women live is even more critical when working with refugee and Syrian women. Working with refugee women demands more specialized human resources, more financial investment, more time and energy and lastly, but most importantly, a strong political will on the part of state authorities and NGOs working or aspiring to work in this field.

How do you plan to implement this project?

We plan to conduct trainings for women’s NGOs that are already running or planning to run counselling centres. Through these trainings, these NGOs will gain an understanding of the legal and social conditions of refugee and Syrian women in Turkey, the services available for them – health, education and social services – and, most importantly, their rights and the mechanisms they can refer to in cases of SGBV.

The trainings will be conducted with 45 women’s NGOs in three different cities: Mardin, Adana and Ankara. Subsequently, we will organize meetings with local actors, including local authorities, provincial branches of relevant ministries, universities and NGOs working with refugees – all of whom will be invited to participate, to identify partnerships and synergies for the future.