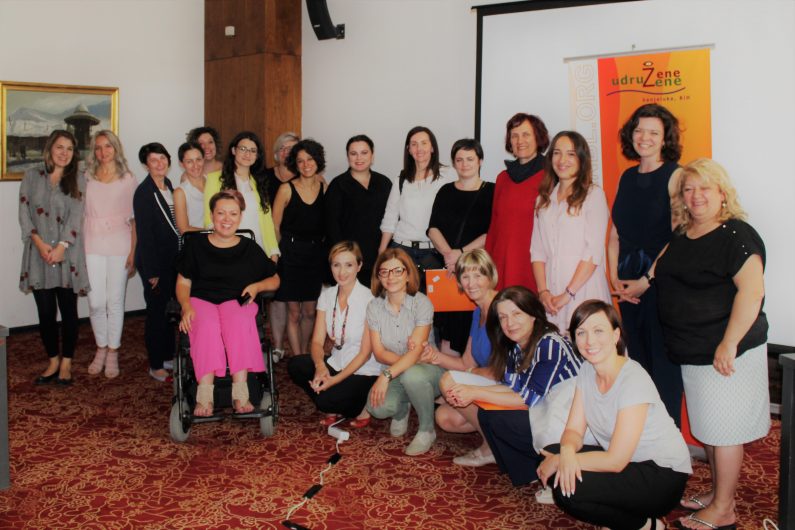 The first day started with an introductory speech by David Saunders, Representative of UN Women in Bosnia and Herzegovina. David Saunders talked about the importance of the Istanbul Convention, as a turning point in fighting violence against women, and GREVIO as an excellent mechanism to assure the functioning of the Convention.

Mr. Saunders’ introduction was followed by Ismeta Dervoz, former delegate in the Parliamentary Assembly of Bosnia and Herzegovina, who gave an overview of the political system in the country as well as of the ratification and implementation process of the Istanbul Convention.

The first day continued with a presentation given by GREVIO Member, Biljana Brankovic, on how to specifically use the tools of the Istanbul Convention to provide improved support for women by writing GREVIO Shadow Reports. Ms. Brankovic emphasized the importance of writing and submitting shadow reports as well as the work that lies behind such a report and the financial burden, as most organisations do not receive any funding for this activity. She further offered advice about strategies on how to write a report.

The day ended with a presentation from Ines Leskaj, director of AWEN Network, Albania, who offered participants an overview of the Albanian experience in writing the GREVIO Shadow Report.
The second day started with a discussion about the current backlash against the Istanbul Convention, mostly coming from conservative governments and churches. Data collection and shadow reports were emphasized as powerful tools to show the level of violence in countries as well as to lobby for better legislation.

The discussion was then followed by two presentations, one focussing on the role and importance of organisations representing marginalized groups of women in the process of reporting to international bodies, delivered by Tanja Mandić Đokić from Association of Women with Disabilities ‘Nika’. Ms. Mandic emphasized the importance of including women from disadvantaged groups in the movement, as there is this tendency for them to feel invisible.

The final day ended with an overview of the experience of women’s NGOs in Montenegro in writing the GREVIO shadow report, delivered by Nada Koprivica, from SOS Hotline for Women and Children Victims of Violence Niksic, Montenegro.

The meeting gave regional organisations an opportunity to trade ideas about Bosnia and Herzegovina’s upcoming GREVIO report while also to network.

This meeting was made possible with the financial support of the European Union and UN Women.