Judges fighting the violence against women and girls in Albania

The Gender Alliance for Development Centre (GADC) has been monitoring the operation of Coordinated Referral Mechanisms (CRMs) in several municipalities since 2017, with the support of the UN Women and funding by the European Union. In these years, special attention has been paid to meeting legal obligations and delivering the role of CRM members in line with the Law on Measures against Domestic Violence (as amended) and DCM no. 334 dated 17.2.2011 “On the mechanism for the coordination of efforts in referring and handling of domestic violence cases” and based on the Objective III of the National Strategy on Gender Equality and its Action Plan 2016-2020. Given that representatives of district courts play a prominent role in CRMs, GADC organized a workshop which brought together judiciary representatives and experts against gender-based violence in order to pinpoint and elaborate the obligations and responsibilities of judges in protecting women and girls who survived violence.

By clicking the link https://bit.ly/3ztRIFx you may read a detailed newsletter of this roundtable. 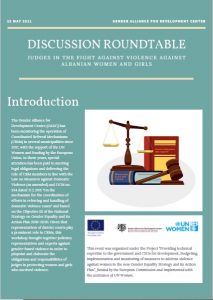