The fason industry companies are considered as one of the main sources of women’s employment in Albania. According to official data, a total of 68 thousand people were employed in this sector, where 80% are women and girls. But this is only the visible part, since the number of women and girls working in the fason industry is much higher, if we consider those working in the informal market.

Due to the large impact this sector has on the employment of women and girls in the entire country (another element is that companies are also concentrated in small cities and suburbs of the large cities, where the need for employment is even higher), the Gender Alliance for Development Center has been working closely for about 5 years with monitoring, advising, and building the capacity of the fason sector employees.

Work has focussed on identifying the working conditions for thousands of women and girls, respect for their rights in the workplace, as well as guiding and empowering them through training, workshops to inform them of these rights and of how they can demand their implementation by their employers.

The GADC contribution has also been extended to establishing communication bridges with state institutions. From the intensive work with women and girls in the fason sector, it was noted that there was no co-operation between the Labour Inspectorate or the Anti-Discrimination Commissioner, which would enable stronger oversight over employers in terms of creating favourable working conditions and ensuring human rights for employed women and girls.

Therefore, thanks to the work and persistence of the GADC, the Labour Inspectorate has today returned into great support for women. Thus, in March 2018, The Gender Alliance for Development Centre, in co-operation with the Inspectorate launched the free green number 0800181818, where all employees in the fason sector and others are invited to address their problems. This phone number is available for 7 days a week over 24 hours and the database, list of calls, and the problems reported are constantly monitored. There have been numerous, regardless of fear of employers, and despite the lack of a culture to report problems, which is slightly changing during 2020, with women or girls starting to embrace the culture of reporting. However, this still remains an issue.

There are over 60 cases reported by the employees about working processes and violation of their rights. However, the unreported cases, due to the above-mentioned reasons, are much more. The Labour Inspectorate has responded quickly to every call received on the green number. Following the signals give by the GADC, this institution has visited the relevant companies and then informed the GADC through detailed reports of the findings and actions taken in case of violations by employers.

During 2020, visits were carried out in more than 12 fason companies in Durres, Elbasan, Bathore (Tirana) etc. As mentioned, there are over 60 cases of reports on the working conditions and labour rights conditions, with 5 cases having been successfully resolved by the Labour Inspectorate, while other cases have been resolved through advice given to  employers, reviews and other periodic checks.

These are encouraging data that demonstrate a work done with passion and dedication to protect women and girls, to encourage them and the state institutions to respect human rights in such sensitive sectors, like the fason sector and beyond.

To quote only a few paragraphs of a thank-you letter received by GADC that shows and points out that each of us can do something, and all together, we can achieve something big. This letter comes from the women of  Remal factory in Bathore (Tirana)

“ … GADC has visited us very often. They have listened to us, guided us, and above all, they have informed us. If we’re stronger today, it is because we know more today, when it comes to our rights. Today we know where to go to ask for help. No. 08001818 has been the greatest form of support for us. It is precisely exactly the phone call we made on this number on October 10th, which is what made us to write this letter…”

“ … One day, the Head of our Floor, Fatimja, ordered us, in an inhumane manner, to get our stools out and work standing. She even hit one of the women with a stool in her leg. That day was our worst day, amidst tears and insults, I did not hesitate. In the middle of that chaos, I went to the bathroom, took up the phone, and called 0800181818…”

“…In three days, there was a raid by the inspectorate, 4 men and two women. They saw fear and fatigue on our eyes, and ordered that we bring the stools in, and never remove them again. They said that if this would happen again, they would shut down the business. They also wanted to see Fatime, and told the owner that the least he could do was to suspend her for two weeks, so she could think about it. To our surprise, the owner said yes and kept his word and promised that this would never happen again. Thank you GADC for all the help you’ve given us!

Thank you very much, from the women of  REMAL factory” 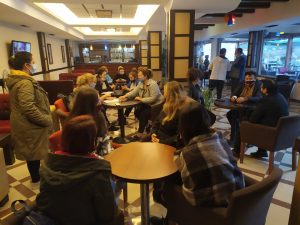 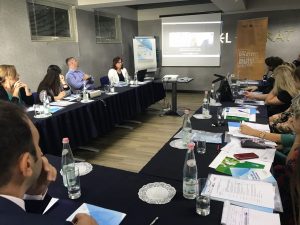