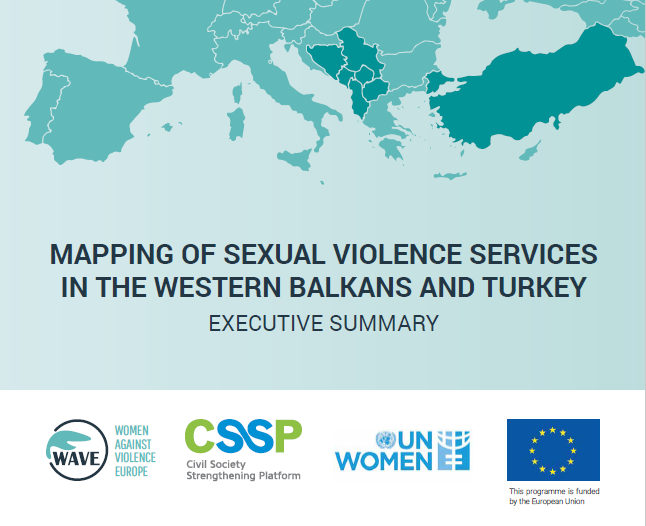 December 9th, 2019 – The ‘Mapping on sexual violence services in the Western Balkans and Turkey’ Executive summary aims at providing an overview of the services specifically supporting victims of sexual violence in Albania, Bosnia and Herzegovina, Kosovo, Montenegro, North Macedonia, Serbia and Turkey.

Furthermore, the Explanatory Report of the Istanbul Convention acknowledges that since sexual violence is especially traumatizing, it requires a particularly sensitive response by trained and specialized staff. Throughout the implementation of the CSSP project in frame of the EU/UN Women programme: “Implementing norms, changing minds”, all partners in the Western Balkans and Turkey identified the lack or only rudimentary provision of specialist sexual violence services in the region.

Moreover, there is no holistic data collection about the number of support services working with victims of sexual violence nor the type of institutions that might be providing these services. Therefore, the mapping report provides an overview of the number of support services specifically for victims of sexual violence in the countries, assesses who provides these services, what kind of services are available and where they are located. The present report is a joint effort between the WAVE office, all nine project partners and consultants who were tasked with interviewing different women’s NGOs and national stakeholders in all seven countries.

Lastly, the report also identified the increased need to supply capacity building and systematic training to all parties involved in supporting victims of sexual violence. Patriarchy, gender stereotypes and traditional values were also identified as significant obstacles in addressing the issue of sexual violence, along with stigma and the unwillingness of victims to report the violence.