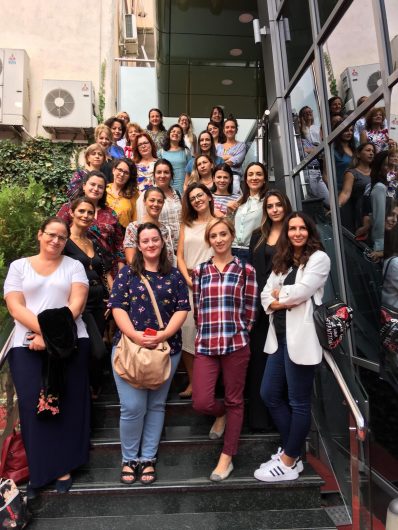 The final partners’ meeting ‘Implementing norms, changing minds. Civil Society Strengthening Platform: A two-year partnership’ was held in Tirana, Albania, from the 11-12 of September. 28 participants from all seven partner countries as well as policy makers (representatives from the Albanian Ministry of Health and Social Protection, Albanian Ombudsman, Albanian Parliament, Albanian State Police) and UN Women representatives have gathered together to take stock of the main achievements and lessons learnt in the past two years of the programme and showcase any best practice examples or successful stories from the region. Moreover, the 1.5 day meeting also aimed at bridging the gaps between policy makers and women’s NGOs to ensure a more effective partnership between the two stakeholders. The first day of the meeting was moderated by Iris Luarasi (Vice-president GREVIO from Albania), and started with a discussion on how to ensure effective partnership between women’s NGOs and state institutions. Throughout the session, participants shared advantages and challenges of being part of a network (be it national or regional), the collaboration that partners have with their national institutions, as well as good practice examples when it comes to approaching national governments.

The second session welcomed presentations from Serbia and Kosovo, where national good practice examples where discussed among the participants. One good practice example comes from Serbia, who established, from 2016 – 2019, seven centres for victims of sexual violence, out of which three of them are currently running. The three centres run in three cities in North Serbia and they are a cooperation between the Serbian national government, women’s NGO ‘Center for Support of Women’ and UN Trust Fund. The second part of day showcased key deliverables of the CSSP partnership in the past two years: mainly the comparative report on ‘The benefits and challenges of women’s networks in the Western Balkans and Turkey’, prepared by Association Fenomena, Serbia; the lobbying activities for the implementation of the Istanbul Convention in Bosnia and Herzegovina; the comprehensive report on ‘Advancing the Istanbul Convention implementation: The role of women’s NGOs and networks in the Western Balkans and Turkey’; and last but not least the results and benefits of the social media cooperation among the CSSP partners prepared by Lina Piskernik from the WAVE office.

The second day was reserved for CSSP partners, where partners had the chance to discuss the results of the mapping on sexual violence services in the Western Balkans and Turkey as well as future possibilities in addressing these gaps. Furthermore, all CSSP partners and other women’s NGOs representatives discussed how to further strengthen the CSSP platform, how to further engage in advocacy activities together and what would it be more useful to focus on in the upcoming year.