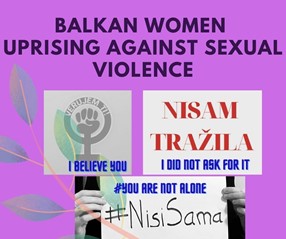 FOR THE PAST TWO WEEKS SEXUAL VIOLENCE FLOODED ENTIRE SERBO-CROAT-BOSNIAN MEDIA AFTER FIVE ACTRESSES FROM BELGRADE REPORTED A RENOWNED TEACHER  OF A PRIVATE ACTING SCHOOL OVER RAPE CLAIMS!

“From now on Belgrade is a more beautiful and safer place because one dangerous sexual perpetrator is in jail!“  These are the words of one of the colleagues of courageous young women who spoke out about the systematic sexual torture of young girls by Mika Aleksić, 68, in his private school for acting.  First one to speak out was the brave actress Milena Radulović, 25, his former student, currently based in Russia, who reported him to the police for raping her several times starting in 2012 when she was 17, and he 61. She said on her Instagram page: “After a hard internal struggle, some brave young women and I decided to stand in the way of a dark circle of abuse. We want to protect other girls from harm. I feel a huge responsibility towards young girls, towards society, but also towards myself. This thing must be brought to an end. We will not give up.”

Few days later, four other actresses joined in reporting sexual abuse by the same perpetrator. Aleksić was arrested on 16 January 2021 “on suspicion that he committed eight criminal acts of rape, seven illegal sexual acts to the detriment of six injured parties, one of whom was a minor”. He denied the accusations during questioning.

Mika Aleksić, called pedocriminal by feminists, was a popular teacher of acting who started to teach in the 1980-ties in the time of Yugoslavia, as part of the Public Radio and Television service. After 2000 he founded his private acting teaching school, Aproximately 3,000 people attended his classes over four decades.

More so, this perpetrator was close to the notorious war criminal Zeljko Raznatović “Arkan” who orchestrated many war crimes in Croatia and Bosnia and Herzegovina before being shot dead in 2000. Besides filming him during the war in Croatia, he stood as a candidate for Arkan’s political party in the 1993 elections in Serbia.

Publicly coming out of being a victim of rape or of any kind of sexual violence or harassment remained rare in Serbia until two  weeks ago.  The best known recent case was of Marija Lukić, former small-town secretary who sued her boss, former mayor, for sexual harassment in Serbia’s first high-profile “Me Too” trial in 2018.  When she launched a case against him, she sent the court about 15,000 text messages this perpetrator had sent her over a two-year period. After two years of the court procedures and support of women’s organizations, the perpetrator was sentenced to three months in prison, to be enforced this week (!), six months after a court decision.

So far, the only actress who has spoken out about rape in the acting industry was Danijela Štajnfeld. In September 2020, she came out publicly that a powerful man from the film industry had raped her eight years ago, not naming the rapist. Instead she made a documentary film on sexual violence, Hold Me Right in 2020.

“I’m not the only one he raped but I’m the one who talks about it. The big problem is that women have to be silent, which is often a reason why they get depressed, indulge in alcohol or try to kill themselves. I hope this film will help others to speak out. I was silent for years. I even fled from Serbia to USA so as not to be raped again.”

Balkan first ever mass protest against sexual violence was organized on 19 October 2019 by several women’s rights groups from Croatia under the slogan: Pravda za djevojčice – Justice for girls.  The  feminist anger this time was raised after the release of five young men accused of gang-raping, harassing and blackmailing a 15-year-old girl in the coastal town of Zadar. The protestors demanded institutional justice for victims of sexual violence.

The general public, feminists, human rights activists, people from the film and theatre industry flooded social network and other media appalled by the revelation about the man many considered to be the Belgrade ‘best professor’ for preparing future actors. 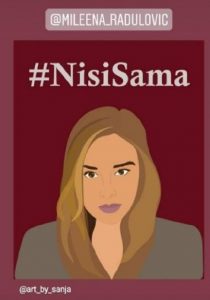 The news spread out throughout different media in the country reaching Bosnia and Hercegovina, Croatia, Montenegro – the same language zone.  One of the historical consequence  is the launch of the Facebook page NISAM TRAŽILA – I did not ask for it,  the very same day of the actress’s testimony. The page was founded by four former students of Drama and Film Academy in Sarajevo with the aim to be open to similar testimonies in the region. What happened after was not expected from no one, not even in our feminist dreams, much less from the 4 founders!!  Over 33,000 followers in the first five days and hundreds of testimonies of women’s experiences of sexual abuse and harassment flooded in.  Two weeks after, this Facebook page has turned into a regional version of the MeToo movement!! All kinds of media started covering sexual violence for the first time in history! A few days later another Facebook page came out NISI SAMA – You are not alone. A week ago women’s Facebook page MEDUZA in Macedonia opened for women’s testimonies.  Thousands of women across the Balkans have since come forward with their own stories on these two portals and various other social media. People send their photos with the banner #NisiSama! Feminist Facebook page Verujem Ti – I Trust You launched the campaign We are on your side for survivors of sexual violence. Most women’s  organizations have written information, various comments and essays on this issue.

Misogynist reactions have spread on the social media as well, for example the young women who opened the page NISAM TRAŽILA have received circa 3,000 threatening messages!

The Belgrade activists opened a Facebook page No means No – with numerous information supportive to women coming out with the sexual violence testimonies, and also with a precise aim to lobby government to adopt the educational protocol for comprehensive sexual education in the primary schools already done by various experts, lead by a feminist organization Incest Trauma Center. A petition demanding training on “recognition, response and methods of protection against sexual violence” in Serbian schools has collected almost 10,000 signatures.

Another human rights organization, Academy for Democratic Development, started a campaign of proposing a change of the law for the crime of rape. Until now, in Serbia there is still an old law that demands from the victim to show in court the evidence of her defense against rapists, even though Serbia has ratified the Istanbul Convention, a binding document of European Commission, which demands that these kinds of sexist laws be changed.

Until 30th of January, 2021 in Croatia, the four university faculties received over 30 complaints, for “sexual harassment” mainly from former students. Also in Zagreb, one professor of veterinary surgery was already suspended for sexual abuse of female students after nine of his former students filled a complaint with the support of another professor. 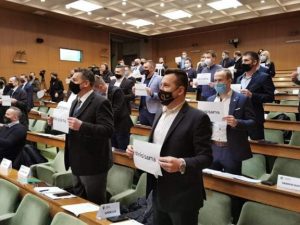 Many university faculties in the region for the first time in history issued public statements with information how to support their students to report sexual violence, with new protocols or local documents (from Cetinje, Sarajevo, Belgrade, Zagreb, etc.).  For example, The Academy of Performing Arts in Sarajevo has formed a Commission for the Prevention of Sexual and Sex-Based Harassment, The Academy of Drama Arts of the University of Zagreb invited everyone to report sex-based abuse within the faculties, the Faculty of Drama Arts (FDU) in Belgrade  launched a special platform “FDU – Against Violence”, for prevention of sexual harassment in educational processes.

The Government of Sarajevo municipality passed a historic Decision to appoint an expert team to draft a Protocol on dealing with sexual harassment and violence in administrative bodies, public companies, public institutions and legal entities.

The city parliament of Zenica, Bosnia and Hercegovina, started the session on the 28th of January by a historic image of all parliamentarians holding the banner #NisiSama  #You are not alone.

On January 26th, the notorious Belgrade Acting school of the rapists was closed down.

One of the colleagues of the courageous actresses shouted via social media: “Young women taking the first step of a million miles thank you!” There is no way back – the sexual violence has finally entered the public sphere, the iron stigma of shame oppressing women survivors has started to crumble, the shame and guilt of sexual violence is turning from victims to rapists where it should be and we see the beginning of the pressure to governments to take this crime seriously. Truly revolutionary women’s uprising against sexual violence already on its way!

Verujem Ti / I Believe You