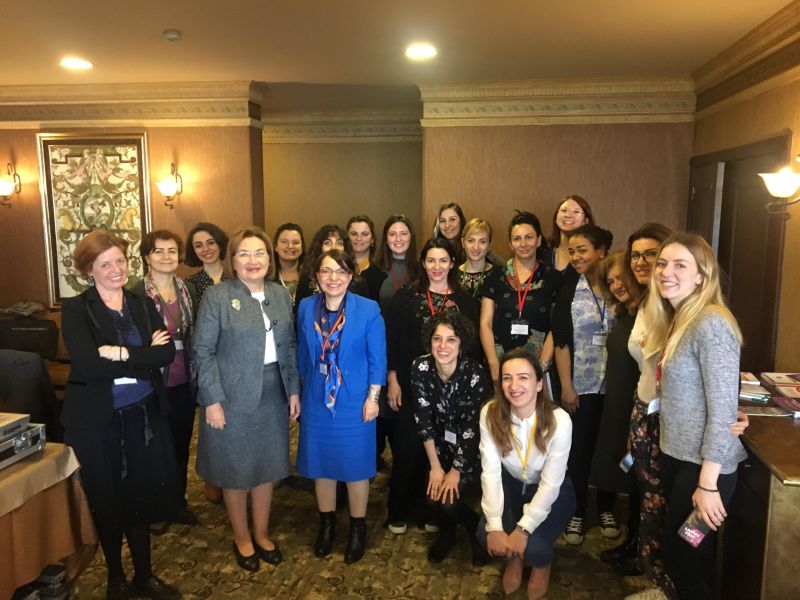 April 4, 2018 – From March 29th-30th, the training on the Istanbul Convention and GREVIO Shadow Reports as tools of advocacy and lobbying for CSOs was held in Ankara, Turkey. The training was organized by Turkish CSSP regional partner Kadın Dayanışma Vakfı – The Foundation for Women’s Solidarity in cooperation with WAVE. The first day was opened by Yolanda Iriarte, Regional Programme Manager/Programme Specialist for UN Women Eastern Europe & Central Asia. This was followed by a presentation by Professor Kadriye Bakırcı of Hacettepe University about the monitoring of the Istanbul Convention.

Professor Feride Acar, President of GREVIO and one of the original authors of the Istanbul Convention, gave an engaging presentation on the monitoring of the Istanbul Convention and making more efficient use of the GREVIO recommendations as a lobbying tool. The use of the European Court of Human Rights decisions in advocacy work was then discussed by Feray Salman, General Coordinator of the Human Rights Joint Platform.

On the second day, Anca Ciupa, Lina Piskernik and Beverly Mtui of the WAVE office, spent the morning session giving presentations on using the CSSP case study as a learning tool, the CSSP social media strategy as well as legal tools used for implementing the Istanbul Convention, specifically the online Council of Europe HELP course on Violence against Women and Domestic Violence. The training concluded on the afternoon of March 30th with two absorbing presentations. The first was given by Huriye Karabacak, from the Foundation for Women’s Solidarity, about monitoring of CEDAW reports followed by a presentation by Figen Demir Çıra, of the same organization, about human trafficking from the perspective of the CEDAW.

The two-day training gave the regional partners an excellent opportunity come up with new and innovative ways to further network within and without their regions, and better monitor the implementation of the Istanbul and CEDAW Convention.

This meeting was made possible with the financial support of the European Union and UN Women.